The Berlin Wall – a summary

Since we had a huge amount of traffic through questions regarding the berlin wall, we would like to take the opportunity and answer the most important ones of them:

After the 2nd world war, Germany was seperated into an eastern (GDR) and a western (BRD) country, which also included a separation of Berlin according to the divisions (West Berlin as british, french and american – East Berlin as the russian sector). So the socialistic regime in the east wanted to “protect” its national border from the capitalistic influence from West Berlin by building this Wall as an “anti-fascistic barricade”.

The former Berlin Wall between East and West - by siyublog

When was the Berlin Wall built?

The construction started on 13th of august in 1961 and took a couple of months to be finished.

Who ordered the Berlin Wall?

Walter Ulbricht, president of the GDR at this time, ordered (subsidiary for the interests of the socialistic regime and those of Russia) the build-up of the Berlin Wall.

How long was the Berlin Wall?

The longitude between West Berlin and East Berlin (inter-city border) was 43,1 km.

When was the berlin wall knocked down?

The “knock-down” started in the night between Thursday, November 9th and Friday November 10th in 1989, after over 28 years of existence.

Why was the berlin wall torn down?

Because it was time for a change! The opening of the Berlin Wall was drivin by numerous manifestations and the demand for “travel freedom” in the former GDR. There was a continous so-called “escape of the Republic” – where large parts of the population of the GDR flew into the Federal Republic of Germany on international territories, through embassies in several Eastern European capitals (among others Prague and Warsaw) and partly in Hungary since it opened its border with Austria on September 11th in 1989.

For at least ten minutes, Barack Obama kept the crowd waiting – then he appeared at the Victory Column. Around 200,000 spectators celebrated the speech of the U.S. presidential candidates as a pop music concert. 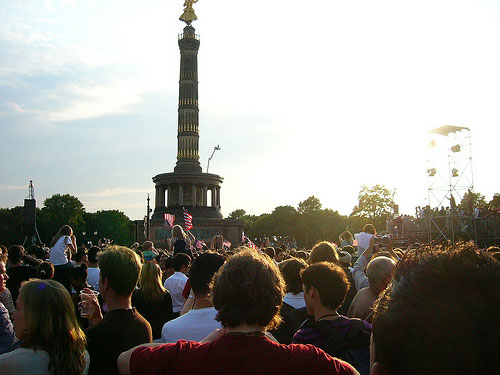 Obama visits Berlin - Speech at the Siegessäule, by hibiotech

Not a long time ago, Dr. Motte fired up the masses of love addicts at the Love Parade from here. But on Thursday evening, Barack Obama spoke at Berlin’s Victory Column in front of around 200,000 people about his message of political change in the world. Obama’s team had done all the work. By far in the direction of the Brandenburg Gate, tourists celebrated in peaceful festival atmosphere.

Get in touch with Berlin`s history!

Immerge yourself into the brilliant vibe of this unique metropole city. find your spot along famous Kastanienalle, walk around the Reichstag or just have fun in one of the infamous nightclubs such as the trasor or Panorama Bar.